It’s hard not to notice the changes occurring in Downtown Kitchener. Whether you’ve lived here long enough to see Kaufman turn from a footwear factory into condominiums, or whether you moved here just in time to witness the LRT construction, there have been dramatic changes taking place in the downtown core for many years. Recently, numerous tech companies have popped up in Downtown Kitchener, some sharing collaborative working spaces, and larger companies getting spaces of their own. At the same time, more people have been moving to the area, trendy coffee shops have appeared, and the streets are no longer empty in the evenings, particularly during public events and festivals. Downtown Kitchener, it seems, is being revitalized.

Yet as long as these urban changes have been happening, there have also been ongoing conversations about the social and economic impacts of such changes. Some members of the community have voiced concerns that the seemingly endless benefits of such rapid urban change are uneven, and that certain groups are being left behind or pushed out. They say that as the economy becomes steadily more knowledge-based and technology plays a greater role in our daily lives, those without access to education and technology will be left out. 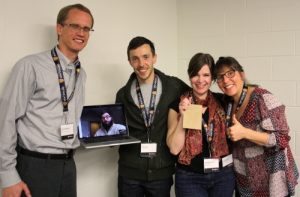 In light of these concerns, a group of researchers from the University of Waterloo, Ryerson University, and the University of Northern British Columbia, along with Stephanie Rozek, Executive Director of Hive Waterloo Region, teamed up and decided to continue these conversations in a more tangible sense. They designed a project, the Downtown Kitchener Gentrification Study, to bring together academics and community members in a serious discussion regarding how urban change is currently being experienced by different people, and what could be done to make these experiences more equitable. The initial funding for the project was provided by the University of Waterloo Community Health Environment Communications (CHEC) Initiative’s Seed Grant, enabling the team to hire a Research Assistant (myself) to help make this idea a reality.

After laying the groundwork in the spring of 2017, the team hosted a workshop at the Kitchener Public Library on June 23rd. This workshop was the first stage of the project, an initial gathering of Downtown stakeholders who came ready to share their experiences. The workshop was attended by diverse individuals from a wide array of stakeholder groups including residents, grassroots activists, the arts and culture sector, non-profits, community services, tech companies, and the municipal and regional government. The conversation was engaging, enlightening, and received positively by many of our participants. As such, many came away from it inspired to keep the discussion going.

The project is currently in its second stage: building on the knowledge shared in the workshop, the team is organizing a photovoice exercise, where participants sign up to take photographs of a particular place or something else of significance that represents their observations of change in Downtown Kitchener. These photographs and their captions will enable others to see the world through the eyes of individual members of the Downtown community, bringing to light values, concerns, and ideas that may not yet have been heard by the wider community.

The third stage of this community project will be an exhibition of these photographs and their captions. By gathering this knowledge in both an online and physical exhibit and encouraging continued conversation, our team hopes to provide the basis for further work in making Downtown Kitchener an equitable and inclusive community for all.

You can hear about this project and ask questions at Hive WR Meetup #3 on July 26, 6:30pm at Descendants. Please register as space is limited.