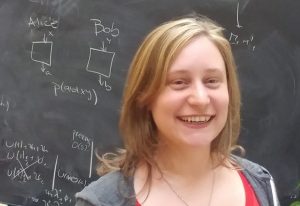 Bel Sainz wants you to know that physicists are normal people, too, with challenges we can all relate to. Bel is a Post-Doctoral Researcher at the Perimeter Institute. In her job as a quantum researcher she has dealt with some common issues being a woman in a male dominated field, but she says things are changing!

At Meetup #4 she will be sharing what women in her field are doing to help each other address bias, and the work she is doing in quantum research. She also answers the question does anyone really understand quantum physics, in this chat we had in advance of the meetup.

How did you become a physicist?

It was a mistake – I really liked math, but I didn’t want to study math itself. I thought physics would give me an excuse to use math in a fun way. I was right, physics is a fun way to apply math to serve a useful purpose.

What does a physicist or quantum researcher do?

Depends on if you are an experimentalist or a theorist. At the Perimeter Institute there is only theory. As a theoretician you spend lots of time to formulate a question that is relevant and well defined, something that will be useful to the world. Then you you read literature to see if it’s already answered, and team up with people interested in the same question. With the team you devise ways to solve the problem.

If you solve it, then you start the writing the process so people understand it. It takes a long time to convert it into something readable. Scientists don’t like this part!

Are there challenges in being a woman in this field? Do you have a lot of female colleagues?

Yeah, there are many challenges. The first one is it’s a very competitive field. Sometimes there is a romanticized notion that a scientist is someone who works 24/7 and does it all for pleasure, not to pay bills, so it doesn’t pay well. If you want to get married or have children, that can have a negative impact. That’s why many women don’t advance to higher levels.

A good thing is that awareness is being raised in the field, so it’s changing. There are still some dinosaurs around. It will take time. There is also the thing with men who don’t know how to behave professionally working with women. It’s much easier than it was 20 years ago, but many things need to be addressed.

We have loads of networks, for women in science, in physics, etc, so a lot of support and ideas: we come up with ways to combat bias, and break implicit bias. Many sub fields are already engaging in development of these policies.

What are you working now?

My research has been about why would nature be quantum? Previously studies have been on why is the world not classical, why are there things that can not been explained by classical mechanics? We are trying to do something different, why everything you see in nature could be explained by quantum.

What would you like people to know about quantum physics?

I’d like them to know about the research field in general that you don’t see in the movies. Sometimes it’s not about being smart, it’s about being able to deal with frustration. It’s very important for a scientist to have that abilty to stand up again and keep trying, because 90% of the time you will be frustrated. Then one time a year you’ll have something that you are happy with and you need to hang onto that the next twelve months.

Finally, if someone tells you they understand quantum physics they are lying.

Bel is originally from Argentina. She travelled through Spain to get her PhD and then conducted research in England at Bristol University and now at the Perimeter Institute. Hobbies are pottery, craft beer and learning to love soccer with her Argentine colleagues.